Building a Cloud Botnet on Parse.com

Today I'm going to talk about Parse.com and a trial account feature that allowed me to build a cloud botnet.

Parse is a cloud based app service that lets you deploy and run your app code in the cloud making building and maintaining apps easier. Facebook bought the company in 2013 and with it being eligible for the bounty program I thought I'd take a look for security issues.

Parse offer free trial accounts with 20GB storage, 2TB traffic per month, a maximum of 30 requests/sec and the ability to run one process at a time for a maximum of 15 seconds before it's killed.

The stats above are for one account, but how about if we sign up for two accounts? Well that would effectively double all my quotas. How about a hundred, thousand or a million accounts? I could massively increase my limits and cause all kinds of mischief.

Taking a look at the registration page (in 2013) there was no hardening at all. Account registration was as simple as sending this POST request:

In 2013 no email verification was required, no CSRF token, no captcha, no throttling. The security team had basically missed the registration page. One year later, email verification is still not required. A CSRF header is now required and so is a session cookie. But there still isn't any anti-automation so anyone could register a million trial accounts.

In 2013 it was easy to register accounts by just using Burp Intruder to send multiple registration POST requests. Because of the new session/CSRF requirements in 2014 I created a python script to perform registration.

The script will connect to Parse, grab session info and CSRF header, register an account, register an app for that account then grab the API keys which we'll need to communicate with our bots.

There are two ways to deploy code either using the Parse tool (a packaged python script) or directly through the API (api.parse.com/1/deploy). Directly connecting to the API is the cleaner option but it would have taken me a while to reverse the Parse tool and extract the integrity check code. To save time I just used the Parse tool as is. To use the tool though you need to create a project locally and add your apps before you can deploy code.

You can then grep the appids and keys from the global.json settings file:

To send code to Parse you just put code in the cloud folder on your local machine and run the deploy command. I started off by putting the helloworld program in main.js:

And uploaded it to every bot using a bash for loop:

Not the cleanest approach but the Parse tool does all of the leg work.

With the bot accounts created and code uploaded I could call the API and have the bots actually run my code. The simple approach was just using Curl:

I also put together a more snazzy python script with threading code from stackoverflow:

At this point I'm sure a few of you are like this: 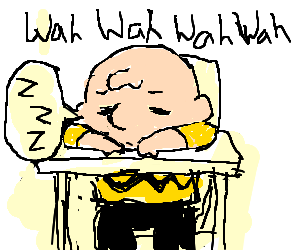 And I guess you're wondering, after all this configuration, what can you actually do?

Well Parse allows you to process data and send HTTP requests. For a bad guy this means they could do things like mine bitcoins, crack hashes, DOS attacks or proxy malicious requests. For testing purposes I decided to focus on bitcoin mining and DOS proof of concepts.

Knowing next to nothing about bitcoin mining I did a little Googling and came across the post here that had a great practical explanation of mining. As mining basically consists of SHA256 hashing I decided to create a hashing benchmark script for Parse. As Parse uses Javascript I took the SHA256 crypto JS here and uploaded it to Parse with a for loop and timer.


Testing different iteration values I found one Parse instance could handle roughly 40,000 hashes per second which is pretty slow. Using the threaded python script I included above I continually called multiple instances and could hit about 6,000,000 hashes per second. But even this is no where near the speeds of real mining hardware. (Also real mining uses double SHA256 so the 6Mh/s is probably nearer 3Mh/s in real terms)

Part of the problem is the 15 second time limit on Parse processes, another issue is Parse have throttling in place so if you make too many API requests they start blocking connections. So bitcoin mining seemed possible but not practical with the current restrictions.

Using multiple trial accounts and some form of amplification I was curious how high I could get my outbound traffic volume (going from Parse to my target).

Starting with some simple httpRequest code I was able to get my instance to send thirty outbound requests for every one API request, proving amplification was possible. Two things to note though, the outbound requests go at a max rate of around 15 requests a second, also you need to remove the success/error response as that will close the process.

Example test code is below:

When scaling this up though the bottleneck is the same as the bitcoin mining, 15 second processes and max API requests per second limit the throughput. But is there any way around these restrictions?

It dawned on me that instead of using my workstation as the command and control I could use one of my apps as the C&C. I could send one request to my C&C app and he would communicate with all the other apps. But why stop at one C&C? Having one master, multiple slave C&C's and a pool of workers would in theory help increase throughput as I would be sending requests from multiple Parse ip addresses. 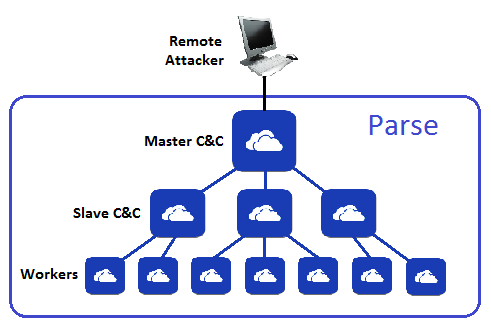 I created some recursive app code that included a list of every bot's appid and key and pushed this to every bot. The code would select bots at random and request that they run the same code. I passed a counter parameter that was incremented after each request to give the illusion of a tiered infrastructure. When the counter hit the "worker tier", instead of calling other bots, the bot would send multiple http requests to the target site.

With multiple workers all simultaneously connecting to the target ip i got something like this: 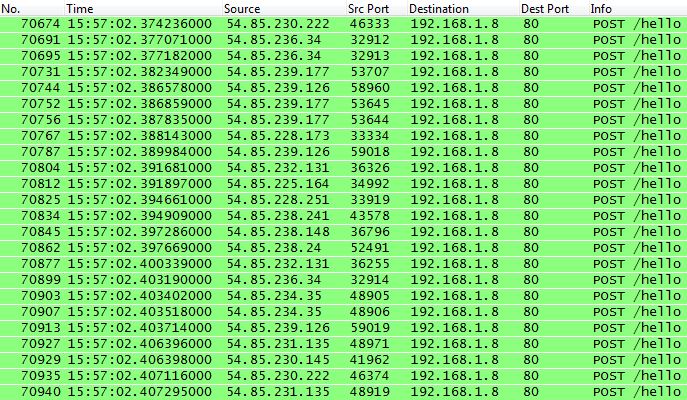 The source ip is Parse, the destination is my local machine. Looking at the "Time" column you can see a throughput of roughly 600-1000 requests per second. For me this was a promising start and I'm sure with some code tweaks, more bots and more than one external ip, the requests per second could have been increased substantially.

Although I didn't have time to build a working POC I think it may be possible to build a cloud worm on Parse. In a nutshell, as Parse allow accounts to run code and send http requests, there is the possibility that a Parse app could itself create a new account, deploy and then run code. The new account would then repeat this process and so on, gradually consuming the entire cloud's resources. 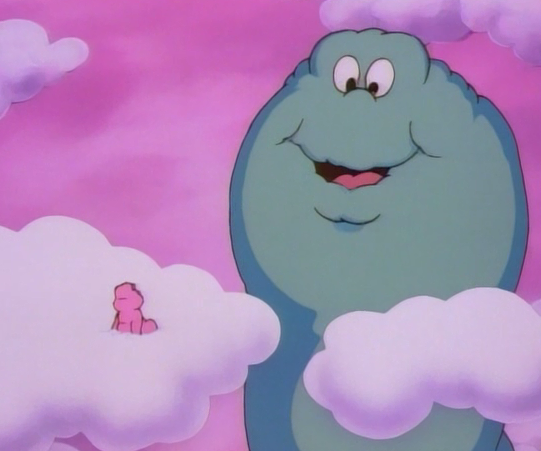 Letting people run code on your servers is a risky business. To prevent abuse you need a solid sandbox and tight resource restrictions/monitoring. In this post I've only scratched the surface of Parse looking at some super obvious issues. I wish I'd had more time to dig into the cloud worm possibilities as well as background jobs which looked interesting.

Mitigation-wise anti-automation and email verification on the sign-up page would have helped. As would tighter inbound/outbound throttling/resource restrictions for trial accounts and also blocking app to app access. I don't think Facebook/Parse chose to implement any of these fixes and instead decided to focus on monitoring for suspicious resource usage.

Questions, comments and corrections are always appreciated! Thanks for reading.