Targeted Email Spoofing and the Alexa100


Today I'm going to talk about email spoofing and how it can be used to improve the quality of targeted spear phishing. I'll demonstrate a simple technique to test for potentially vulnerable SMTP servers and apply it to the Alexa top 100 sites.

Although there's nothing really original about this post after searching around it did seem there was a lack of good information and practical demonstration of this topic so hopefully this post might help fill that space.


SMTP and Email back to basics

The simple mail transfer protocol (SMTP) is the defacto way of sending email while receiving of email is performed using POP or IMAP. These services together with a sprinkle of DNS form the email system we know and love. Wikipedia had a great diagram showing how everything ties together: 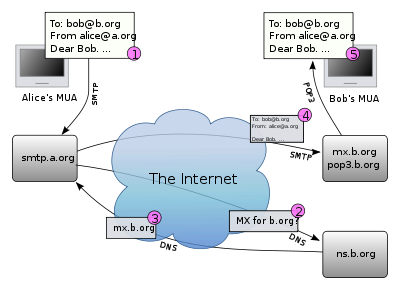 You may notice there are no verification or authentication steps, which coming from a web app pentesters point of view, is a serious issue and is actually exploitable.


Back to the 90's with Telnet and SMTP

These days most people use local or web based email clients and the details of the sending process are hidden from view. However you can still connect and communicate directly with SMTP servers using a command line tool like telnet or netcat. The basic commands you'll need are HELO, MAIL FROM, RCPT TO and DATA.

Here's an example involving the mail server for a large media organisation: 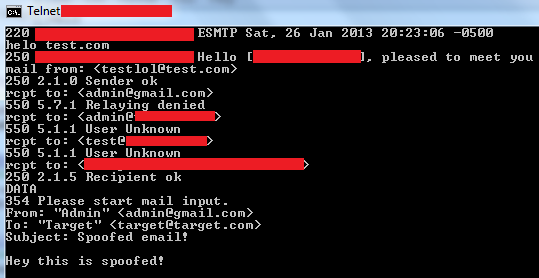 Notice how easy it was to send a spoofed email (Email where the sender address and other parts of the email header are altered to appear as though the email originated from a different source). There was no login process, no verification of who we were and although we couldn't send email to external addresses (a.k.a Open relay), we were still free to spoof email to any employee within the organisation. Not good. 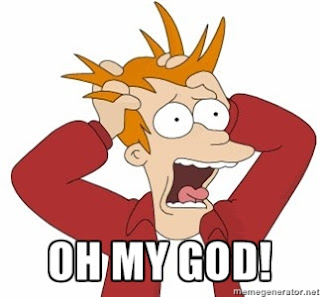 But why should you care? One big reason is spear-phishing. Spear-phishing relies on tricking users into opening attachments and following links from cleverly crafted emails. The more convincing the email the more successful the attack and what's one very easy way of making email convincing? By sending it from a legitimate address.


What about spoofing prevention?

Prevention can be performed using sender verification, reputation based systems and rate limiting. These mitigations can be applied on the SMTP server to prevent sending of malicious email or on the inbound mail gateway to filter received mail. For SMTP the site below has a great overview of securing your mail server and includes some spoofing specific protections:

Mitigations in a nutshell:
Unfortunately these mitigations aren't always implemented because legitimate email can get blocked if the sender has no rDNS/SPF/DKIM setup or if someone tries to send corporate email from a home/thirdparty ip address. See thread here:

Every company has different priorities and will choose to balance security and functionality differently. However even if the checks above aren't stringently enforced to block email, the rDNS/SPF/DKIM results can be combined to evaluate email (as spam filters do today).

Monitoring and filtering of emails that try to spoof your company's own domain (e.g. joe@company.com to mary@company.com) can easily be implemented on an email gateway and can give a decent security gain with minimal service impact.

Lets take a look at some of these preventions in real life.

Before I got the chance to enter any commands Facebook performed a reverse DNS lookup on my IP. On my home internet connection my ISP has not defined a PTR record for my IP, so the check fails and the connection is dropped.

My IP was on a blacklist so before i could enter any commands Ebay closed the connection. Time to change IP!


Google didn't appear to force any checks on the SMTP server, instead they seemed to focus on clever filtering on the receiving end: 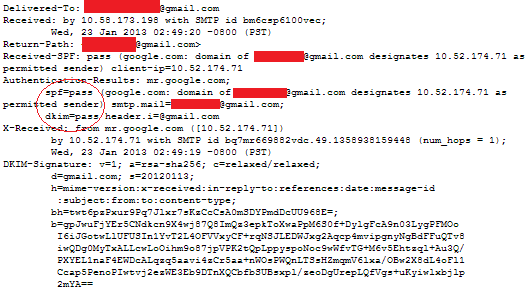 The Gmail spam filter is pretty complex taking into account multiple factors. Interestingly SPF is taken into account but not required for an email to be classed as legit. In the valid email above you can see some of the checks being performed. This link has more info: http://support.google.com/mail/bin/answer.py?hl=en&ctx=mail&answer=1366858&expand=5

I received a spoofed message from bbc.co.uk and Gmail sent the message to the spam folder. The "neutral" error message was quite interesting. Looking at the BBC SPF record:

We can see they whitelist some legitimate ranges which is good, but notice the ?all on the end. This means any email using @bbc.co.uk not from those ranges is marked as neutral but still accepted by the receiver. Softfail (~all) would be more effective at catching spoofed messages as they are rejected by default. The best option would be deny all (-all) strictly defining who is allowed to send mail from "@bbc.co.uk".

Related to Gmail spoofing is the awesome story of the guy who cracked Google's DKIM allowing him to spoof email to Google addresses, worth a read: http://www.wired.com/threatlevel/2012/10/dkim-vulnerability-widespread/all/

So those are some of the big guys. But what about everyone else? What about the average corporate mail server, does it use protection..?

I was curious how many companies were open to spoofing so I created a simple test script that would connect to a server, supply an invalid HELO and a spoofed MAIL FROM using that company's domain. As most mitigations should have kicked in by this point, if you receive a "Sender ok" chances are the server will send your spoofed mail.

And what better place to test this script than the Alexa Top 100!

I first compiled a list of the Alexa Top 100 mail servers using a bit of curl/grep/nslookup magic.


This will output a file containing a list of domains and corresponding mail servers, one per line.

Note: Most companies have multiple SMTP servers. This script will return ALL of the mail servers.

I created a python script to test for servers that would accept a bogus HELO and spoofed MAIL FROM using their own domain.


There's a lot of ways you could output the data, I decided to just print out the domain and responses from the SMTP server separated by *** for easy splitting in Excel.

If you modify the script remember to include the \r\n after each command. Without it the SMTP server won't respond. This had me stumped for quite a while until I spotted the missing 0d0a using wireshark ;)

I chose to use raw python to get more granularity. You may want to consider using smtplib:

And for you Ruby fans out there:

In the Alexa100 there are approximately 330 mail servers covering 74 unique companies. Why only 74? A number of companies such as Google, Amazon, Microsoft and Yahoo have multiple sites in the top100. For example Yahoo has, yahoo.com, yahoo.co.jp and flickr.com.

Then there's also the issue of the mail provider. 33 of the top 100 domains are either Google owned or companies that use Google mail or Postini (also Google). Microsoft as well as Netflix and Dailymotion use Microsoft's Bigfish email service. The four Amazon sites use the same Amazon mail servers, the three Yahoo sites use Yahoo mail servers and two sites, t.co (Twitter) and hao123.com (Baidu), use mail servers on their main domains.

With most sites also using multiple mail servers the analysis started to melt my brain somewhat. In the end I decided to start with a list of all the mail servers: 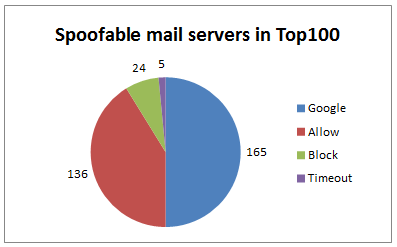 And here's a chart of just the top 100 sites showing potentially spoofable sites: 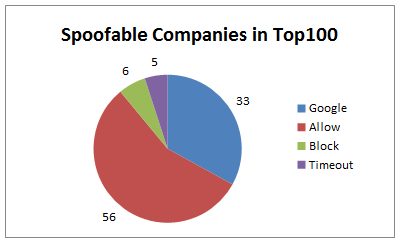 At first glance it looks like two thirds of the sites can be spoofed, but how accurate are the results?

Well one of the biggest flaws with my script is that the check is inconclusive. Without actually sending and receiving the email there's no way to know whether the company is using any mitigations or filters to stop spoofed messages.

Also Google makes up a large chunk of the servers. In my testing although Google SMTP servers allowed spoofing their inbound filtering correctly identified my messages as spam, so I'd class Google as spoof proof(?). No doubt there are ways around the Google filters but it's something I'll save for another post ;)

To try and improve the reliability of results I also took a look at the Alexa top 200. 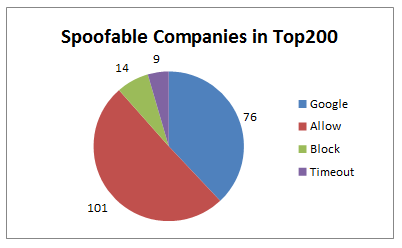 Even accounting for Google, the number of spoofable sites appears to be quite high. As mentioned it's not a full proof technique but I do believe it's a useful indicator. Although I was not able to manually test every company, I did test three large companies and my spoofed messages were received successfully. Unfortunately I can't say who they were as I don't want to get sued :)

So the big question is have companies accepted/partially mitigated the spoofing risk and moved on, or are they blissfully unaware of the risks and simple mitigations that can have a big impact?

I started this post knowing next to nothing about email spoofing. Through research and testing I've found it interesting to see just how many companies deploy relatively liberal SMTP policies.

Often security mitigations are black and white but in the case of spoofing it's more grey because of the risk of blocking legitimate mail. Although at the moment spoofing hasn't been a big priority I believe it's something people are going to be focusing on more in the future. Especially as systems become more secure and attackers transition further into social engineering.

If you work for one of the Alexa 200 affected let your CIO know he needs to update his mail servers or at least switch to Gmail ;)


I hope you guys have found this useful, as usual questions, comments (and corrections!) are always welcome.